Obama: Bullying 'is not something we have to accept

Obama: Bullying ‘is not something we have to accept 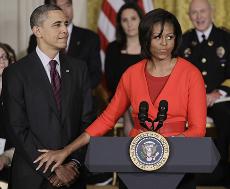 President Obama opened a White House conference on school bullying today by saying that all Americans — parents, teachers, coaches, and people in general — have a responsibility to make sure children are not threatened or intimidated by their peers.

Bullying is not “a harmless rite of passage,” but can have “destructive consequences for our young people” — from poor grades to suicide.
“Sometimes we’ve turned a blind eye to the problem,” Obama said.
About 150 students, parents, and teachers are attending the conference, discussing their experiences and possible ways to prevent bullying moving forward.
“No family should have to go through what these families have gone through,” Obama said. “No child should feel that alone.”


Obama said bullying is frequently targeted as “kids that are perceived as different,” from the color of their skin to sexual orientation. “It’s not something we have to accept,” Obama said.

The president also said his big ears and unusual name made him a target: “I wasn’t immune. I didn’t emerge unscathed.” 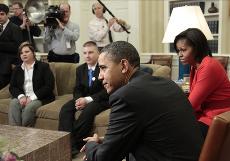 The co-host of the anti-bullying summit, first lady Michelle Obama, said children have the right to be safe in the classroom, on the playground, and online.


And children often don’t volunteer information about their harassment, Mrs. Obama said.
“When something is wrong we need to speak up and we need to take action,” she said.
In urging more communications between parents and students, Mrs. Obama cited one of her own children:

“We don’t always know, because they don’t always tell us every little detail.
We know that from Sasha. Sasha’s response is — ‘what happened at school today?’ ‘Nothing.’
That’s it. It’s like, well, we’re taking you out of that school.”